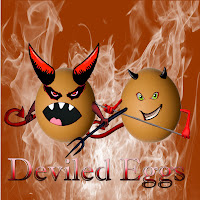 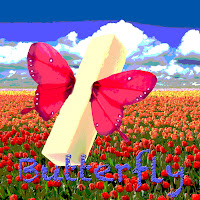 The purpose of the Visual Puns project was to demonstrate a pun using photoshop. The first of my visual puns was deviled eggs. I took an image of an egg and found different pictures of devil looking creatures and moved some of those parts onto the eggs. I used the selection tools to cut out different parts of devil images for the eggs. For the background, I took a picture of fire and used a new tool called Threshold.
My next visual pun was a butterfly. I interpreted it as a stick of butter that has wings. Again all I did was find a picture of butter, cut it out, and then find butterfly wings, cut them out as well, and put them together. The new tool I used for this project was the Posterize filter which makes the picture look kind of like a cartoon.
I used this two pictures for my visual puns because I thought they were my best out of the four I did (I also did a Starfish and a Flowerbulb).
Posted by Katie at 12:25 PM